A Great Education for All: Our Education Manifesto 2015

One year from today, on May 7th 2015, the General Election will decide the future of education policy in this country.  The Headteachers’ Roundtable think tank is seeking to influence the debate over the coming year by releasing our own Education Election Manifesto. 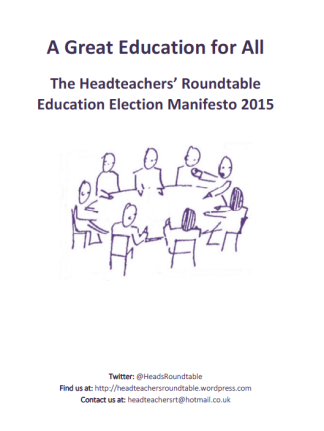 Following the process outlined earlier this year, we received over 50 responses from different people making suggestions for policies and for some of the principles that should guide us.  Taking those ideas on board and adding them to our own, we have now produced a 10-proposal manifesto, covering five key policy areas. Although deliberately sparse, we believe that our proposals represent a coherent roadmap for a system that provides A Great Education for All.

The five key areas are:

The 10 proposals are summarised here:

We are hoping that people engage with the ideas and help us to develop the implementation plans that will follow, leaving comments  on this webpage with constructive suggestions.

We’ve had a commitment from the Secretary of State that he will engage with the manifesto and give us his response.  We discussed this with Michael Gove when we met the three Michaels in February.  We have also sent the manifesto to Tristram Hunt and David Laws and look forward to meeting them and hearing their views as well.

Thanks to everyone who made contributions.

13 thoughts on “A Great Education for All: Our Education Manifesto 2015”